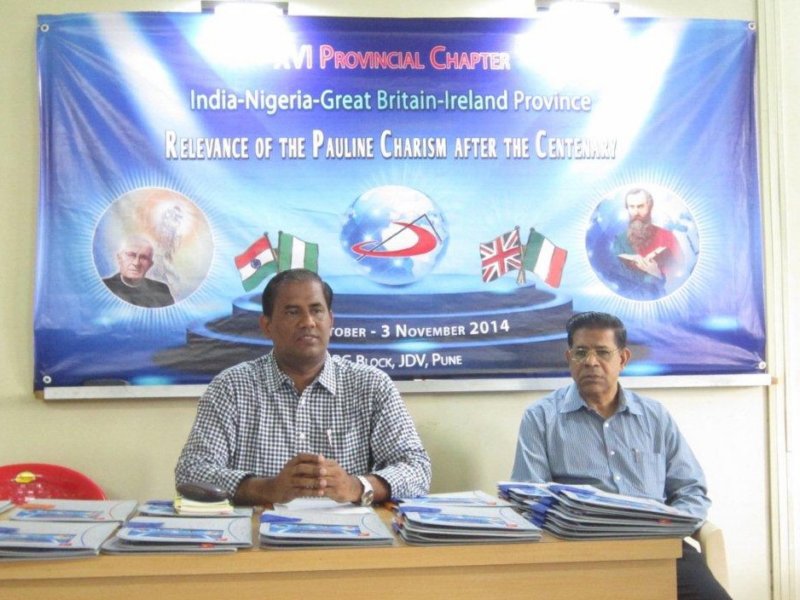 The day began with the celebration of the Holy Eucharist presided by Provincial, Fr Michael Raj. He invited the Chapter members in his homily to be positive in attitude and action. He exhorted everyone to rejoice over the wonderful things that the Lord has done to the members, Province and the congregation at large.

The first session of the Chapter began with a prayer invoking the Holy Spirit. After this Fr Provincial welcomed Br Blaise Thadathil, the General Councillor. Br Blaise addressed the Chapter members and he informed them that Fr Celso Godilano was expected to be present at this Chapter but could not make it as he did not have the required travel documents. In his address, he congratulated the members of the Chapter and wished them good work. On behalf of the General Government, he thanked everyone in the Province for the hospitality and cordial welcome shown to the General Councillors during their canonical visit.

Then the Provincial addressed gathering and exhorted the members ''to see what our Province can be or what our Province has to be in the years ahead of us, years that follow the centenary of our Congregation''.

After the address of the Provincial, the members went on to elect the Secretary and the Moderator of the Chapter. Fr Devasia Puthiyaparambil and Fr Johnson Vattakkunnel were elected Secretary and Moderator respectively. Frs Saju illickal and Fr Aji Joseph were nominated notaries and Brs Jefferey Khongsni and Punna Rao, the youngest in age, were nominated scrutineers.
The Secretary presented a tentative time table which was approved by the members of the Chapter with a few amendments. Then the Director of Formation presented a brief report on the various aspects of vocation promotion and formation. He highlighted some of the positive aspects and some of the difficulties of the sector. Then the members were divided into five groups for a detailed discussion based on the letter of the Superior General, Report of the Province and the Report of the Preparatory Committee on Formation. On completion of the group discussions, the secretaries presented their findings. This was followed by a lively discussion and members suggested many creative ideas for the betterment of our vocation promotion and formation programmes at different levels taking into account the cultural and linguistic diversity of the countries we work in. The day was concluded with the Eucharistic Visit, conducted by Fr John Gilbert and juniors.