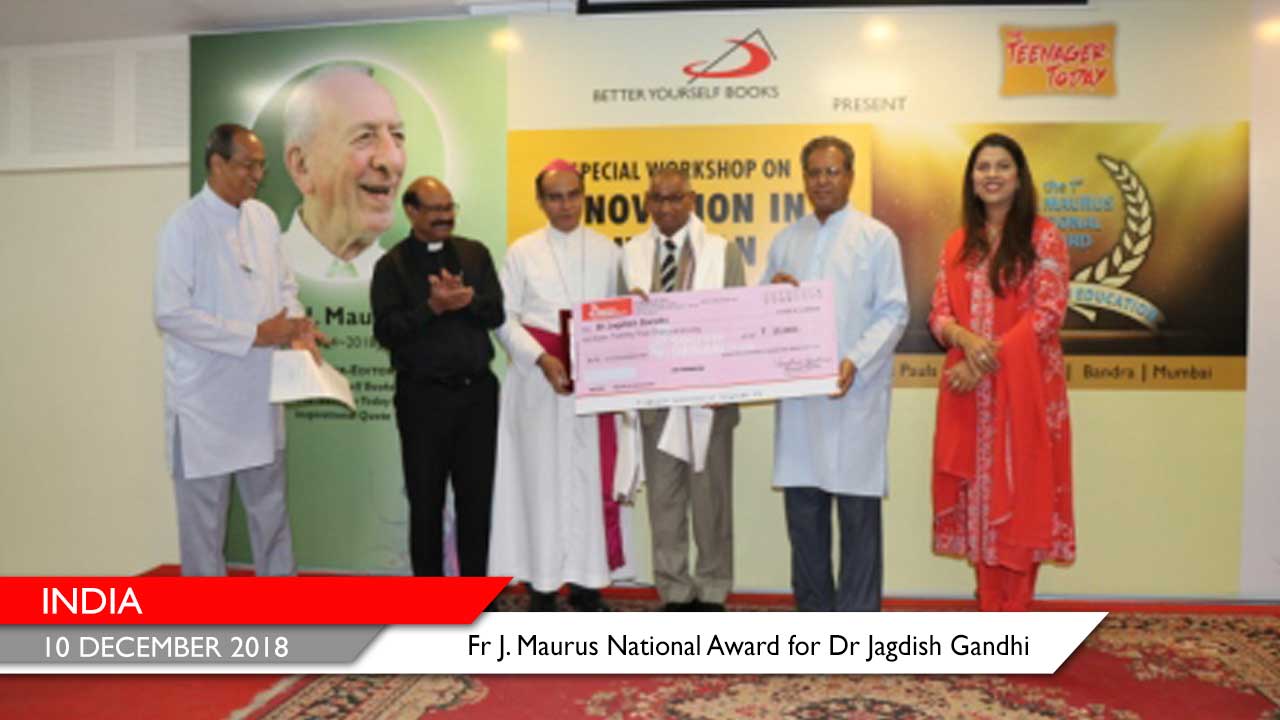 Fr J. Maurus National Award for Innovation in Education was conferred Dr Jagdish Gandhi, Founder-Manager of City Montessori School, Lucknow, at Mumbai on 10 December 2018. The Award was instituted by the Society of St Paul on the occasion of the 55th Birth Anniversary of The Teenager Today, founded by Fr J.Maurus in November 1963.

Establishing the Award at a specially convened gathering at the Alberione Hall, Bandra, (Mumbai) Fr Varghese Gnalian, Provincial, India-Nigeria Province of the Society of St Paul, the publisher of The Teenager Today, said, “We are extremely happy to establish this Award in memory of Fr J. Maurus, a pioneering member of the Society of St Paul, an educator par excellence, a great visionary, an innovator and a prolific writer who has to his credit over 125 books, and to confer the 1st Award on Dr Jagdish Gandhi, the Founder-Manager of City Montessori Schools.”

The Award consists of Rs 25,000/- in cash, and a citation. The Award was jointly presented to Dr Gandhi by Most Rev. John Rodrigues, Auxiliary Bishop of the Archdiocese of Bombay, Rev. Fr Varghese Gnalian, the Provincial Superior, and Dr Snehal Pinto, Director, Ryan International Group of Institutions, Mumbai.

Greatly influenced by Mahatma Gandhi and Vinoba Bhave, Dr Gandhi ventured in 1959 to create a new mindset in children through education. With just five children on rolls, no personal wealth, and with only the equivalent of $10 borrowed from someone, he began his own personal experiment, naming it City Montessori School. Since 1999, City Montessori School has held the Guinness World Record for the largest school with over 56,000 students on its rolls.

Since 2001, he has also been convening the International Conference of the Chief Justices of the World to create awareness and mobilise the World Judiciary to create a world safe for the children of the world. He saw education as a more powerful vehicle to prevent conflicts than working with negotiations and policy efforts. He strongly believes that children are the world’s future, and the best way to mould the future is to mould children.

Despite the fact that he heads the world’s largest school, Dr Gandhi still lives in the same room where he began his work for peace in 1959. He has chosen to have no personal wealth of his own, spending instead all his created resources on his mission.