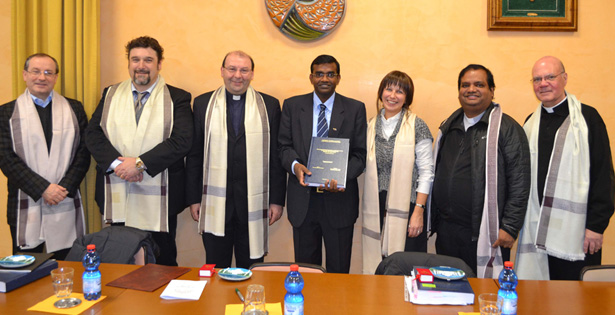 1 February 2016 marks a red-letter day in the history of the India-Nigeria-Britain-Ireland Province, as Fr Dominic D’Silva was awarded a Doctor of Philosophy (PhD) in Communication. Fr Dominic successfully defended his thesis, titled ‘The Role of Organizational Communication in the Life and the Mission of Society of St Paul: An Empirical Research’ at the Salesian Pontifical University, Rome.

The research has been carried out under the supervision of Prof. Alessandro Agostinelli. The defense panel, consisting of Prof. Mauro Mantovani, Rector of the University, Prof. Maria Paola Piccini and Prof. Anthony Clifford Lobo, the first and second readers respectively, were unanimous in affirming the quality of the content.

Fr Dominic’s research bases on the argument that communication makes organization, and three well-known theories were employed to prove the hypothesis. The richness of the research comprised of an in-depth study of the structure and functioning of the Indian Province of the Society of St Paul in its various dimensions, arriving a fifth-flow of communication called,  ‘Spiritual Nourishment Flow’ which the researcher claims to be the original contribution in the field.

A note of congratulation was on the lips of everyone who witnessed this momentous occasion: a great number of members of the Pauline Family, including the Vicar General and General Counsellors, friends and well-wishers. A moving thanksgiving speech by Fr Dominic and a thunderous applause by everyone present signalled the closure of the defense. It was followed by sumptuous refreshments for all.

“It’s a dream come true. I am deeply indebted to many persons in the realization of this dream,” said the new PhD holder. Congratulations Dr Dominic D’Silva on making a mark on your own steam! No small feat indeed!