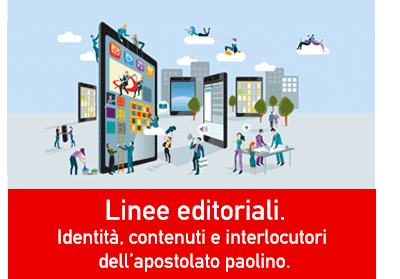 The Society of Saint Paul is a religious congregation which was founded in 1914 at Alba, in Italy, province of Cuneo, by Fr. Giacomo Alberione.

Its members are known as the Paulines. Faithful to the mission assigned them by their founder, they communicate the Christian message with the use of all means that technology put at the disposition of modern man. They are present in 32 countries around the world. They are active in many fields: editorial and bookstores, journalism, cinematography, television, radio, audiovisual, multimedia, telematics; centres of studies, research, formation, animation.

Their logo represents well the dynamism which fills them.

The General and the Provincial Government, assure that the mission comes to life. Father Giacomo Alberione, in the footsteps of Saint Paul to become one for all, has, besides the Society of Saint Paul, founded four congregations:

as well as the Association of Pauline Cooperators.

Together, they constitute the Pauline Family.

The SSP was approved officially by the Holy See on 27 June 1949. Its mission is to "evangelize with the modern tools of communications". It is made up of religious priests and lay consecrated (called Disciples of the Divine Master). They are present in five continents. The Society of St. Paul makes use of magazines, books, cinema, radio, television, discs, casette tapes, compact disc, internet and all technological means of communication to announce Christ and speak of everything in a Christ like manner to all those away from the parish life. The models of the mission are: Master Jesus, Saint Paul, the apostle who became one to all, and Mary Queen of Apostles who gave life to Christ, communicator of the Father.