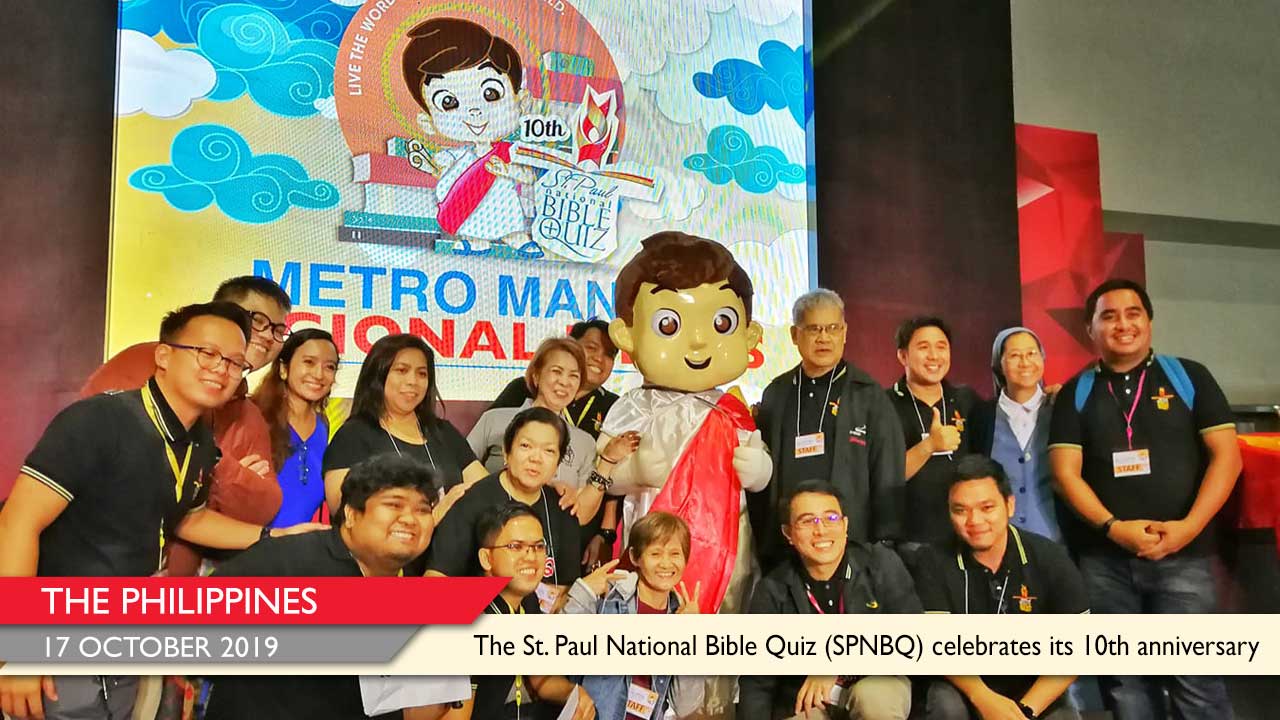 The St. Paul National Bible Quiz (SPNBQ) celebrates its 10th anniversary this year 2019, culminating with the Battle of Champions on November 17, 2019 at the Music Hall, Mall of Asia in Pasay City. It will be participated by 13 schools from 11 regions of the country. For the 10th edition, the Eastern Visayas Region was added, with the contest held in Tacloban City.

The SPNBQ was conceptualized as part of the 75th anniversary celebration of the presence of the Society of St. Paul in the Philippines. Originally, the participating schools were from Metro Manila, Cavite, Pampanga, Cebu and Iloilo. Its first national championship was held on September 17, 2010 at SMX Convention Center, Mall of Asia, with Cainta Catholic College garnering the first prize.

The event turned surprisingly successful that the SSP Province decided to go on with it, until it has reached its 10th edition. Thanks to the SM Foundation which offers free of charge its event centers as venue of the regional championships. Crucial also is the continuing support of sponsors/benefactors like the Manila International Book Fair and the Globo Asiatico Enterprises, Inc. Most importantly, the Bible Quiz would not be successful without the participation mostly of Catholic schools all over the country, some of which gladly offer to host the elimination rounds.

The 10th SPNBQ started last July 20, 2019 in Southern Mindanao region, with the contest held in Davao City. Half-way through the contest, the Metro Manila Regional Finals was held at the Manila International Book Fair on September 12, 2019. At this event, the SPNBQ mascot named Pablito was introduced to the public, to the delight of the Bible Quizzers and the attendees. Pablito is the young St. Paul with scrolls and sword. He will be featured again during the national championship.

By the end of October the Bible Quiz Team shall have covered all the 11 regions of the country and will prepare for the culminating Battle of the Champions. The 10th SPNBQ will surely surpass in number the 382 schools and more than 600 teams that participated in the 9th edition.