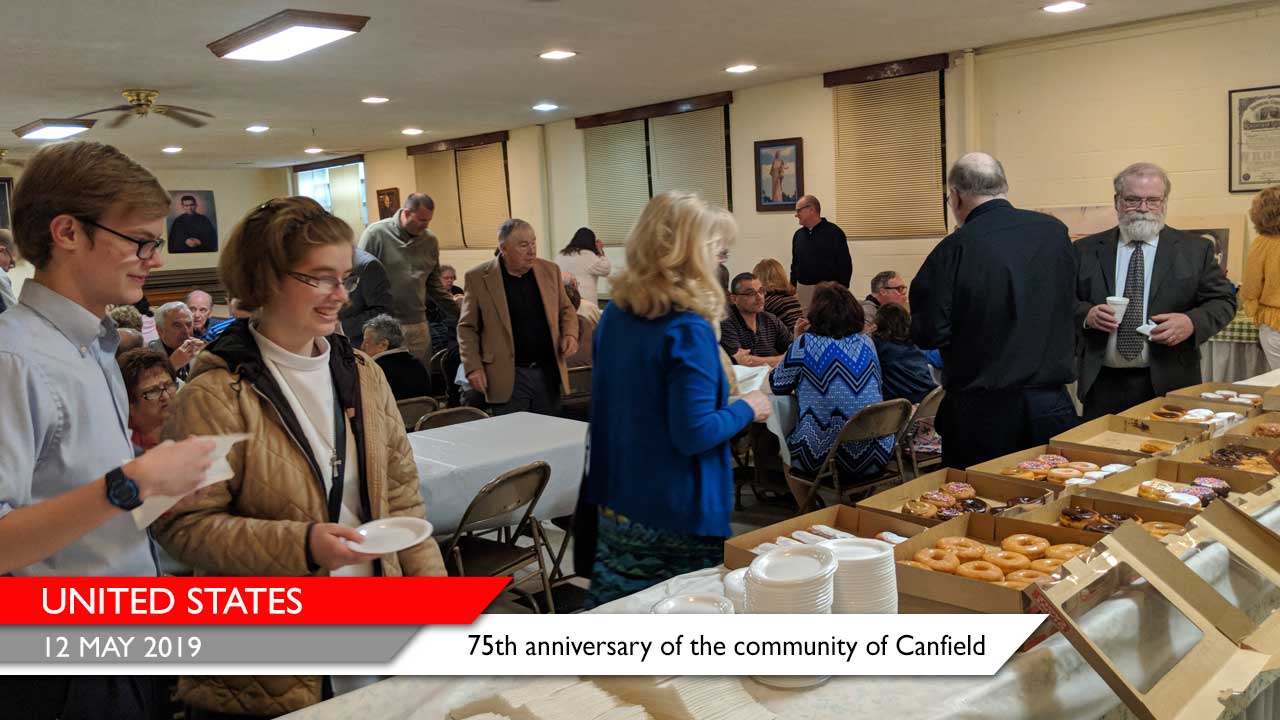 Sunday, May 12th, an atmosphere of celebration and serenity, underlined the day of celebration for the 75th anniversary of the founding of the community of Canfield OH. At the celebration presided over by His Excellency, The Most Reverend George Vance Murry S.J., Bishop of Youngstown were present numerous faithful,  in addition to the superior of the community and organizer of the event, Fr. Matthew Roehrig and to Fr. Tony Bautista, Delegate for the US Province. Members of the Holy Family Institute, Knights of Columbus, lay collaborators, friends and benefactors have gathered around the community to show their affection.

His Excellency recalled the importance ... and thanked for the warm welcome received in our community.

After the ceremony, broadcasted live by CTNY (Catholic Television Network of Youngstown), whose studios are hosted in the Pauline monastery, all the guests met in the community hall for a moment of fraternity and exchange of greetings.

Of particular importance and interest is this brief history of the Canfield community written by fr. Jeffrey Mickler:

“The Society of St. Paul on Staten Island had candidates who were ready for novitiate. Canon Law stated that the novitiate of a congregation had to be away from a purely apostolic community. No diocese understood our mission in communications and therefore none would accept us.

Bishop James McFadden, the first bishop of Youngstown, knew and highly respected Father Borrano who had preached several missions in the Cleveland Diocese to Italian parishes. While visiting the Society of St. Paul on Staten Island he extended the invitation to come to his new diocese that had just been formed one year earlier. The Ursuline Sisters owned a 250-acre property in Ellsworth Ohio and he offered to sell that to the Society so that the sisters could move closer to the city. The Society accepted the offer and the first Paulines arrived in Ohio May 9, 1944.

Along with the three novices, brothers and priests three Daughters of St. Paul were sent to help establish the community and look for their own opportunity to launch their own apostolic initiatives in the Diocese of Youngstown. The Daughters of St. Paul were early on replaced by the Pious Disciples of the Divine Master to care for the novices, brothers and priests and bring their own spirituality to the house. The property consisted of 250 acres of farm land, a late 19th Century Mansion owned at one time by the Harding Family, a barn and several other buildings. A chapel was established in the barn and within a year a new print shop was built so that the novices and members could launch a variety of apostolic activities.

Laity rallied to the aid of the nuns, priests and brothers. Bishop McFadden liked the term “Monastery” and he named the facility accordingly. Though not monks, the location has been popularly called St. Paul Monastery ever since.

From the very beginning the community erected outdoor statues to Queen of Apostles, Our Lady of Fatima, Christ and St. Paul. They were determined to give the rustic property a feeling of the sacred and they established just that. As a way to promote devotion and to raise funds early on Fr. Borrano established a shrine on the property to St. Anthony. As a congregation that was founded in Italy this was quite appropriate but Fr. Borrano realized that St. Anthony had an appeal that was and is very broad among all Catholics. The first shrine to St. Anthony was made of wood and had a statue of Mary Queen of Apostles and an impressive, large crucifix along with a statue of the beloved saint. In early 1948, however, this shrine caught fire and was utterly destroyed. A smaller outdoor location with a statue to St. Anthony was erected and was replaced by the current shrine build in the late 1950s. The location was a center of booming spirituality have nurtured lay cooperators and sponsoring a men's retreats on the grounds. The current “Wayside Shrine” to St. Anthony is open twenty-four hours a day and draws about 5,000 people a year to it. Prayer requests come to the shrine from every corner of the nation.

The novitiate was supplemented by teaching theology to the clerical candidates and on May 31, 1947 at the Cathedral of Youngstown Bishop McFadden ordained six men to the priesthood. The Canfield community has remained a community of formation through all the years that we had novices and junior professed members.

The community had apostolic initiatives from the very beginning. Catholic Home Messenger a national magazine began in 1946 with Fr. Victor as its first editor. Eventually the magazine reached a circulation of close to 200,000 copies. It ceased publication in 1968. In 1953 Pastoral Life a Magazine for priests was begun and eventually reached close to 8000 priests. Years later, unfortunately, the publication ceased.

In the 1970s stores were opened in the Southern Park Mall in Boardman, in the Eastwood Mall in Niles and near Belden Village in Canton. A store was also located on the Society's property in Canfield. The mall stores, the store on our property with changing shopping habits and declines in sales these locations of truth were forced to close. Nevertheless, for several decades these stores met the spiritual and intellectual needs of tens of thousands of people. A new store has been established in Boardman at the heart of the communities shopping and dining district and is carrying on this great Pauline tradition.

The production of audio-visual materials began in Canfield and in 1968 Alba House Communications was launched to produce and distribute cassettes, filmstrips, records and other communication materials. Currently the department has over 500 back titles featuring the leading theologians, scripture scholars and spiritual experts of the United States. The department has 140 titles on Audible Books ready for instant downloads.

In 1980 the Society in Canfield entered an extremely fruitful collaboration with the Diocese of Youngstown and established the Catholic Television Network of Youngstown in the basement of the main building. The stationed was transferred to local cable outlets at first through disk and tower transmissions and now through cable optic wire. Homes and institutions in North Eastern Ohio receive religious programs 24 hours a day from this network. Hundreds of thousands of people have been touched, informed and inspired through these programs. Today, the station does more locally produced programs than ever. The Society produces a Sunday Mass that lasts 45 minutes and features both Society of St Paul, other religious, and diocesan priests. Programs produced at the station have been used on in Boston, New York and Long Island. They have been shown nationally through Catholic TV Boston. The station also produces an award-winning weekly radio program “Wineskins.” that is broadcast over several stations.

The community continues to carry out its apostolic initiatives while caring for its elderly members.